Yesterday Night, there were more than 5000 people who have participated against hanging of balwant singh raajoana which was organised by Jarnail Singh, (Writer) journalist. Jarnail Singh, Writer of "I accuse- Anti Sikh violence of 1984" has demanded magistrial inquiry of police firing in phagwarha (Punjab) where 2 Sikhs have got killed. They were trying to stop a communal organization from burning of balwant singh raajoana's effigy.

Jarnail Singh said everyone has right to protest But, Police should restrain from opening fire. They could apply other methods to maintain law and order. Police officers who are involved in this police firing should get suspended immediately. Yesterday South Delhi witnessed a huge protest march of Sikhs to save balwant singh raajoana from hanging. After 4 hour long march they staged a dharna in front of CBI headquarter with candles in their hands. Jarnail Singh said: Main Purpose of the protest march was to create pressure on CBI to play its role honestly in 1984 cases. After the shoe incident CBI has filed a case against sajjan kumar and now he wants to keep positive pressure on CBI. 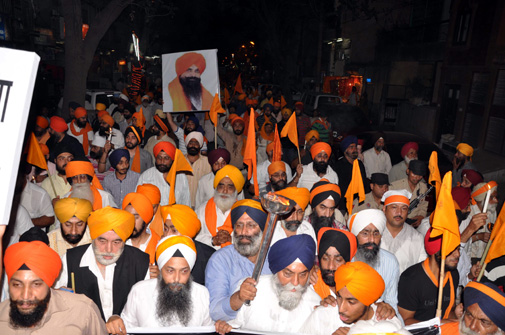