Twenty talented singers and dancers after many auditions from different parts of India are selected for the biggest music reality show of India, “Music Meri Jaan”. Yasser, Swaraj, Nilima, Monica, Aparajita, Rocky, Ramprasad, Sugandha, Shaukat, Maria, Ali, Maggi, Safeena, Thapa, George, Ratnam, Sukhbeer, Anushka, Pari and Robin…. with dreams and aspirations to win the 1 crore cash reward and get instant fame and success, each youngster has stars in his/her eyes and pre conceived notions of the big world of Reality Shows! But little do they know that in Mumbai awaits not just exhilarating excitement, but backbreaking rehearsals, and a whole lot of adjustments, uncertainties, jealousies, lobbying, pressure and above all Chamanlal !

Chamanlal, the production manager has double edged motive to hound the 20 contestants, hawk eyed, scheming, ruthless and unpredictable. Because Music Meri Jaan is a Reality Show which needs “drama”  as its flesh and blood to survive, devouring the emotions and sentiments of whoever comes in its way…. Chamanlal uses all means to achieve “drama” for the show, bowing to the demands of the producer and channel, bowing to his heart that says, only one contestant deserves to win…Nilima. But Why?

Why does Chamanlal of all the people have this intense allegiance towards the demure, simple, quiet Nilima? Drama unfolds gradually and builds as no other Reality Show in India ever. Music Meri Jaan escalates the heights of emotional drama and brings all the 20 contestants up against each other, fighting for votes and getting caught in the game of winning and losing….of love, betrayal, jealousy, infighting, hopelessness and loss. Who or what wins in the end remains to be seen.

A Film By Tanuja Shankar Khan 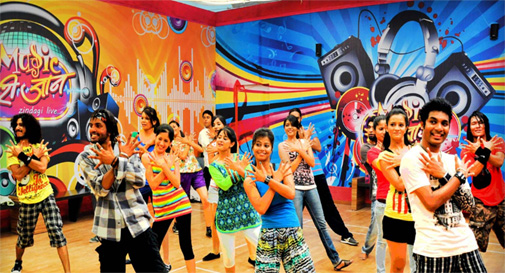 The link for the Teaser Trailer is

The Poster is on