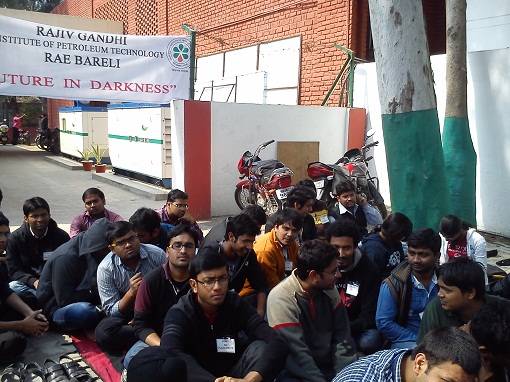 Rae Bareli (Uttar Pradesh) : The students of Rajiv Gandhi Institute of Petroleum Technology (RGIPT) have been peacefully protesting since last week against the ignorant attitude of the management for their concerns.  RGIPT is an ‘Institute of National Importance’ set up by Ministry of Petroleum and Natural Gas, Govt. of India as per the vision of Late Shri Rajiv Gandhi in the year 2008.

It is promoted by 6 major oil PSUs (ONGC, IOCL, BPCL, HPCL, OIL and GAIL) and OIDB. The admission to this institute is through IIT-JEE (Advanced). Part of the vision was to cater the needs of oil and gas industry with skilled manpower but sadly the institute has not been able to live up to it.

Even after 6 years of establishment the institute lacks a permanent campus due to which R&D, industrial interaction and ultimately placements have been severely hindered. The hopes and aspirations of the students at RGIPT and their guardians have gone sour due to lack of attention on part of college administration and policy makers. The management has always slacked to justify its negligence on the concerns that the students have been raising. But what is aggravating is that their future is being played with false hopes and ignorant attitude of management. The status of campus placements is abysmal in comparison to other ordinary engineering colleges, what to talk of IITs, ISM and NITs. The students are a frustrated lot and this has led the students to take extreme measures. The protests lead the management to address their concerns and make promises that actions would be taken. Such protests were held last two years also but only verbal assurances were made to the students with no substantial results. The students have decided that this agonizing procedure can no longer be borne with and their protest will continue until the assurances given to them turn into substantial actions.

RGIPT was publicized to be a flagship institute of the UPA chairperson. Simultaneous to their protest, a group of students met Shri Rahul Gandhi during his visit to Amethi on 19th February, 2014. He was sensitive to their concerns and promised them to visit their campus at Rae Bareli. They look forward to bring-forth the issues to him so that their grievances could be heard.