A complaint was today filed before the Sivaganga Lok Sabha constituency Returning Officer seeking rejection of the nomination papers of Karti Chidambaram, alleging that he has made false declaration in his affidavit. S.K.Srivastava, Income Tax Commissioner based in Delhi who has had a long-running battle with Karti's father, Union Finance Minister P Chidambaram, has filed the complaint before the Returning Officer of Sivaganga constituency in his capacity as a voter. He alleged that Karti made false declaration about his assets and liabilities.

The complainant also alleged that Karti had made false declaration about the income of his spouse and dependant minor daughter. He had not declared in his affidavit the balance sheet indicating profit and loss accounts of his business which were integral part of his assets and liabilities, Srivastava charged.

The complainant claimed that Karti attracted action under Sec.125 A and Sub-section 7 of 123 of the Representative of People Act 1951 and his nomination paper filed for the Sivaganga Lok Sabha seat was liable to be rejected. The value of immovable properties owned by Karti and his spouse and minor child either in his or her name or owned through P.Chidambaram Hindu Undivided family had been incorrectly given. 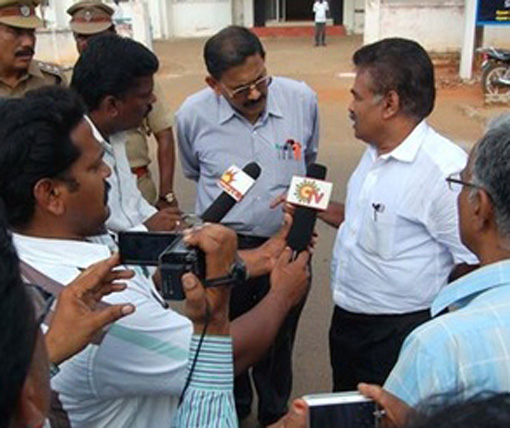 The sources of investments of the dependent child in movable and immovable assets has not been disclosed by Karti, the complainant alleged. During scrutiny the RO V Rajaraman, who is also the District Collector, announced that the nomination papers of Karti were found to be in order.

The official himself was facing charges, he said.

"I don't know who is behind this…" he told reporters at Karaikudi.

Strongly condemning the BJP manifesto, Chidambaram said the party had raked up issues such as Ram temple and uniform civil code which were dropped by the former Prime Minister A B Vajpayee.

"I don't know who gave them courage to take up the issues without bothering about the sentiments and feelings of the minorities," he said.