MiD DAY crime reporter Tarakant Dwivedi a.k.a Akela finally walked free on Saturday after he was arrested under an antiquated Official Secrets Act last week. Delay tactics by an indifferent police almost ensured that the reporter, who was admitted to the ICU on Wednesday, didn’t make it to his bail hearing on time. Almost. Akela jokes, the only crime he can be accused of is that he did his job too well First they draw up an incorrect First Information Report, then they alter the charges and arrest a seasoned crime reporter under an antiquated law on a Government holiday.

Finally, the Government Railway Police do their best to keep MiD DAY principal correspondent Tarakant Dwivedi, who writes stories under the byline ‘Akela’, for two extra days behind bars by delaying his bail process. Akela, who was admitted to the Intensive Care Unit of St George Hospital on Wednesday, after complaining of chest pain in police custody, was expected at a hearing at the Railway court on Saturday.

However, thanks to indifferent police officials, he almost didn’t make it. Finally, his friends and family rallied to get the journalist to court, so his custody could be changed from police to judicial and his bail plea accepted. Akela’s court hearing was scheduled for Saturday, and the GRP was required to produce a letter asking permission from the hospital to produce Akela in court. Without the letter, the hospital could not release Akela.

The police produced the letter only at 1.35 pm, barely half an hour before the judge was to go for a lunch break. The railway court functions six days a week from 11 am to 5 pm. Reaching the court late reduces one’s chances of receiving bail. If the railway court had refused bail, Akela would have had to appeal to the Sessions court, which because of police delay, could only have been possible on Monday.

However Akela, who was represented by advocates Arpan Rajput and Annie Fernandes of solicitor firm Mulla & Mulla, made it to the court on time, thanks to his friends, family and colleagues. Although the court asked for Akela twice on Saturday morning, the GRP who should have approached the hospital before the court begins, only reached in the afternoon. The hospital authorities maintained that if the police had come in with the letter at 10 am, they would have released Akela in less than an hour.

Railway GRP Commissioner Tukaram Chavan said, “This is not done. The investigating officer should have gone to the hospital and completed the formalities early in the morning.” It was left to Akela’s friends to complete the formalities with the hospital as the police officer said he knew nothing about the case. Finally, they received a two-hour reprieve from the hospital and they wheeled the reporter to court. In such cases, it is required of the police to take the person to court in a vehicle if he is unfit to travel. That wasn’t done either.

Akela was finally produced in court at 3 pm, and was sent to judicial custody. His advocates had handed the bail application to the police in advance, but the police asked for time till Monday to go through the application. However, the judge ordered the police to complete assessing the application by 5 pm. By 5.30 pm, the crime reporter walked free, after being released on a personal bond sum of Rs 10,000, with the agreement that he would assist the police in their inquiry in the matter.

The whole case has raised doubts about the nature of the complaint filed by Pradeep Sonthalia, a civil citizen, who cannot charge someone under the Official Secrets Act. The complaint against Akela was lodged by Sonthalia, a private citizen, under Section 447 (Trespassing) of the Indian Penal Code because the reporter had allegedly entered the government armoury in CST in connection with a report that he filed in June 2010. 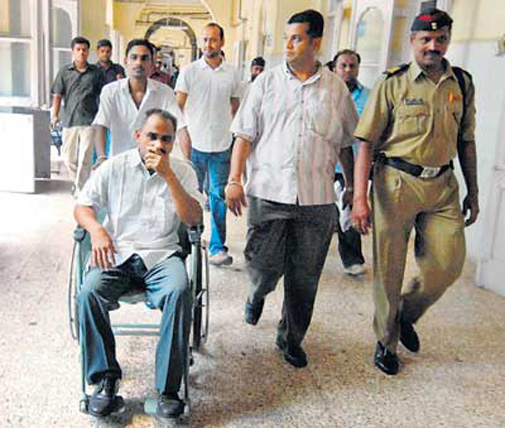 Mid day principal correspondent Akela is wheeled out of St George Hospital at 3 pm on Saturday to be produced before the Railway Court. Pics/ Sameer Markande 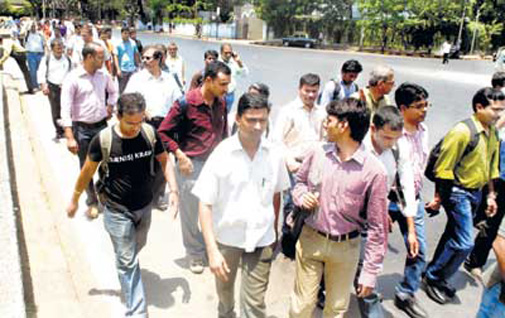 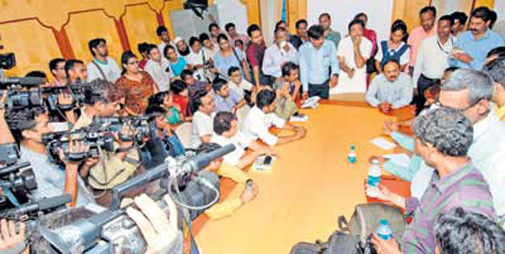 Journalists gather at Home Minister R R Patil’s office in Mantralaya to protest against the arrest of the senior crime reporter allegedly under the Official Secret Act on May 19.

Sonthalia had subsequently sought for charges under the OSA being added in the FIR. The Home Department has also instituted an enquiry into the role of Assistant Commissioner of Police Anil Mahabole, who visited the lock up on Wednesday, before he was admitted to the hospital and threatened him. The Department has also asked for an enquiry in to the role played by Bapu Thombre, who threatened Akela at the hospital. Investigating officer Police Inspector Yeram Pandarinath had been taken off the case on Friday, and it has now been handed to ACP Dilip Chavan.