Another day of Haryana International Film Festival at DAV College for Girls was full of thrill and excitement. A big name of Hindi Cinema Manoj BAjpai was the guest of todays festival. Manoj intercted with the audiences and gave answers to a lot of questions.

There was a live session Mohalla live with Avinash and others. During the session manoj talked about the old days of struggle and his journey till now. He said that his father wanted him to be a doctor but he always knew that he would be an actor. He gives all the credit to theatre and his teacher Barry john and suggests all the struggling people who want to get into acting should at least for two or three years work for theatre. During his theatre days he was connected to people who inspired him to read a lot of communist books and he was always surrounded by progressive people who helped him to be 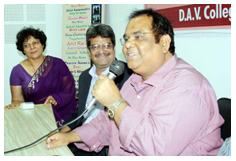 what he is today. He tried to join national school of drama but was rejected many times.

He never lost hope and ultimately he was a student of NSD. The first play which got him fame was natwa. bandit queen was his first film , though he couldn’t get noticed from that film but gradually due to this film he got so many other role and chances. He said that his dream was always to get national award and he got them twice ..One for pinjar and the other for 1971. . He said that while choosing roles he gives utmost preference to script. He always followed a principle his teacher that acting is not talking about it but its about just doing it Giving an answer to a question asked by audience that what difference he finds between the cinema few years back and cinema now.

He said that the cinema few years back just focused on cities but films now days also concentrates on the villages of the country. For making his performance better he reads the script and he lives the script. Telling about the difference between performing in a theatre and in front of camera he said that there is not much difference its just that when you perform in front of a huge audience you have to address a lot of people but while facing camera its just the camera. And he also said that he just believes in performing and camera captures it. He said that he himself is his biggest critic. He rarely watches his movies. He I still has greed to do lot of good roles.  Tele serial swabhimaan gave a chance to prove himself as an actor. Ram Gopal verma’s Satya gave him recognition as an actor and after this film industry accepted him as a big star.

He also interacted with the students of the film appreciation course and gave answers to their so many questions like what is required to be a filmmaker. He said that it needs a lot of patience, passion and stubborn attitude to be associated with films. He suggested every student weather he wanted to be an actor or director. He suggested them to join theatre.

Another star who was here at DAV college today was Actor and film director Satish kaushik. He congratulated principal Dr. Susham Arya DAV College of Girls yamunanagar, and Director (HIFF) Mr. Ajit rai. Satish Kaushik talked about his attachment with Haryana as it is his native place. He said it is a big achievement for the college and organizers to organize such a big event at a small place. He felt very positive about the place, the same he felt as when he went to National School Drama.

He appreciated the efforts of the college to give students extra knowledge of films and and film making. He said that he is trying to promote hrayana in his films . he is working on a project “mera naam mera dhaam” its based on educatiom system in haryan. Very soon this film is goin to get started. He also said that to promote parallel cinema the small cities need to resume or make small an low budget theatres where normal people cam watch movies in nominal rates. प्रेस रिलीज

Comments on “Live with manoj Bajpai and satish kaushik”