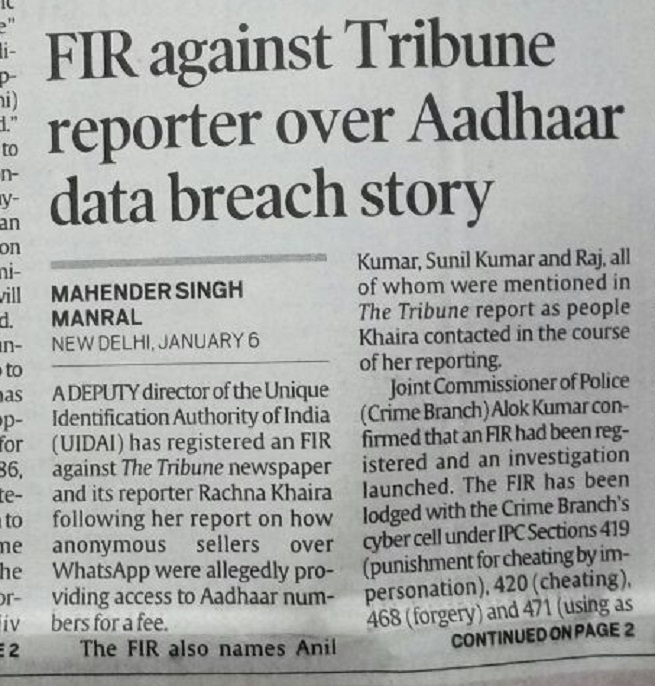 The Editors Guild of India is deeply concerned over reports that the Deputy Director of the Unique Identification Authority of India (UIDAI) had registered an FIR against Rachna Khaira, a reporter of The Tribune, in the Crime Branch of the Delhi Police. The reporter has been booked under IPC sections 419 (punishment for cheating under impersonation), 420 (cheating), 468 (forgery), 471 (using a forged document) and also under sections of the IT Act and the Aadhar Act.

The Tribune report of January 3 by Khaira had exposed how, for a small sum of money made to a payment bank, an agent of a private group would allegedly create a gateway to access details contained in an individual’s Aadhar card. Using a false identity, Khaira had posed as an interested party and claimed in her report that she had easy access to details that individuals had listed in their Aadhar cards. The UIDAI in a statement had subsequently denied that any data breach was possible.

The Guild condemns UIDAI’s action to have the Tribune reporter booked by the police as it is clearly meant to browbeat a journalist whose investigation on the matter was of great public interest. It is unfair, unjustified and a direct attack on the freedom of the press. Instead of penalising the reporter, UIDAI should have ordered a thorough internal investigation into the alleged breach and made its findings public. The Guild demands that the concerned Union Ministry intervene and have the cases against the reporter withdrawn apart from conducting an impartial investigation into the matter.