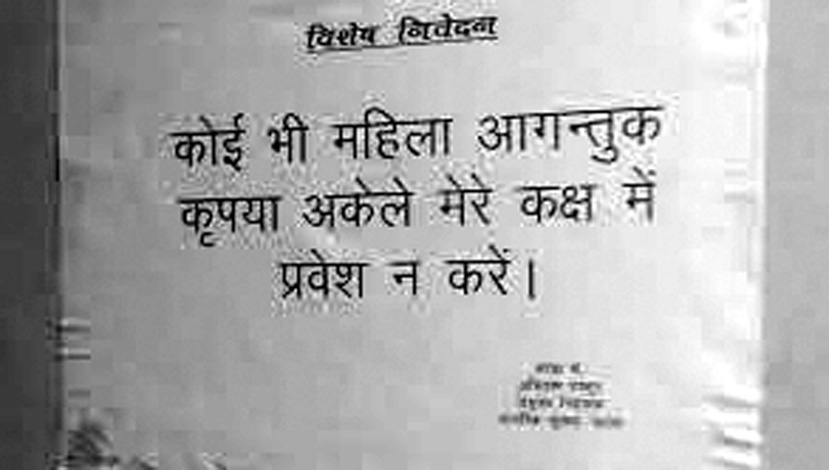 Sub.: Inquiry in the matter of putting a notice outside his office and sharing on social networking site facebook, a notice reading “Woman visitors kindly requested not to come alone in my chamber,” by UP cadre 1992-batch IPS Amitabh Thakur and subsequently punish him for this act  which is highly insulting, objectionable, discriminary  & prejudiced to the whole women race on earth.

Sir/Madam,
You must be aware that UP cadre 1992-batch IPS Amitabh Thakur and his wife Dr. Nutan Thakur have been accused by a Ghaziabad-based woman of raping her and by another Etah based woman of assaulting her sexually at his Viram Khand located residence in Lucknow recently. Both the woman filed the complaint at the UP State’s Women Commission. Scanned copies of both complaints are attached.

This refers to news-reports that following rape charges, inspector general (civil defence) Amitabh Thakur on 21-01-15 (Wednesday) put up a notice outside his office located in Jawahar Bhawan, requesting women not to visit him unaccompanied. Pic of “Woman visitors kindly requested not to come alone in my chamber,” notice as published on a
news website is attached for your perusal.

Currently posted as joint director (civil defence) Amitabh Thakur, 46, has not only put up the notice outside his office located in Jawahar Bhawan but has also shared the picture of the notice on social networking site-Facebook.

This ‘no woman alone entry’ notice put up by Amitabh Thakur outside his office in Lucknow is highly insulting, objectionable & discriminary to the whole women community.

As per media reports, Amitabh Thakur said that he has put up the notice outside his office as a precautionary measure to save him from women who, he thinks, might level false charges against him in future. This whimsical act of  Amitabh Thakur is enough evidence to prove that either Amitabh Thakur has lost his mental balance or he (as an IPS officer) is too prejudiced to provide them justice to women coming to him.

You shall agree that putting a notice by a public servant  at a public office to prevent unaccompanied women to enter his cabin is punishable under service rules also.

So please get the matter thoroughly inquired and take subsequent penal action against IPS Amitabh Thakur as per the law of the land.