Dear Friends, In the years gone by the Progressive Democratic Alliance (PDA) has powered the makeover of the Press Club in 2008 and thereafter delivered 230 flats to our journalist members in the heart of the city in 2010. Over the last few years, we have taken the Club to new heights by promoting the RedInk Awards for Excellence in Journalism. The last 2 years’ awards ceremony at the NCPA has reached outstanding standards even putting better endowed corporate events in the shadow. The RedInk Awards today have not only enhanced the stature of the club on the national stage, but brought much-needed revenue too. Most important, the awards today have become a national platform for debate on freedom of the press and other ethical issues that concern our profession. 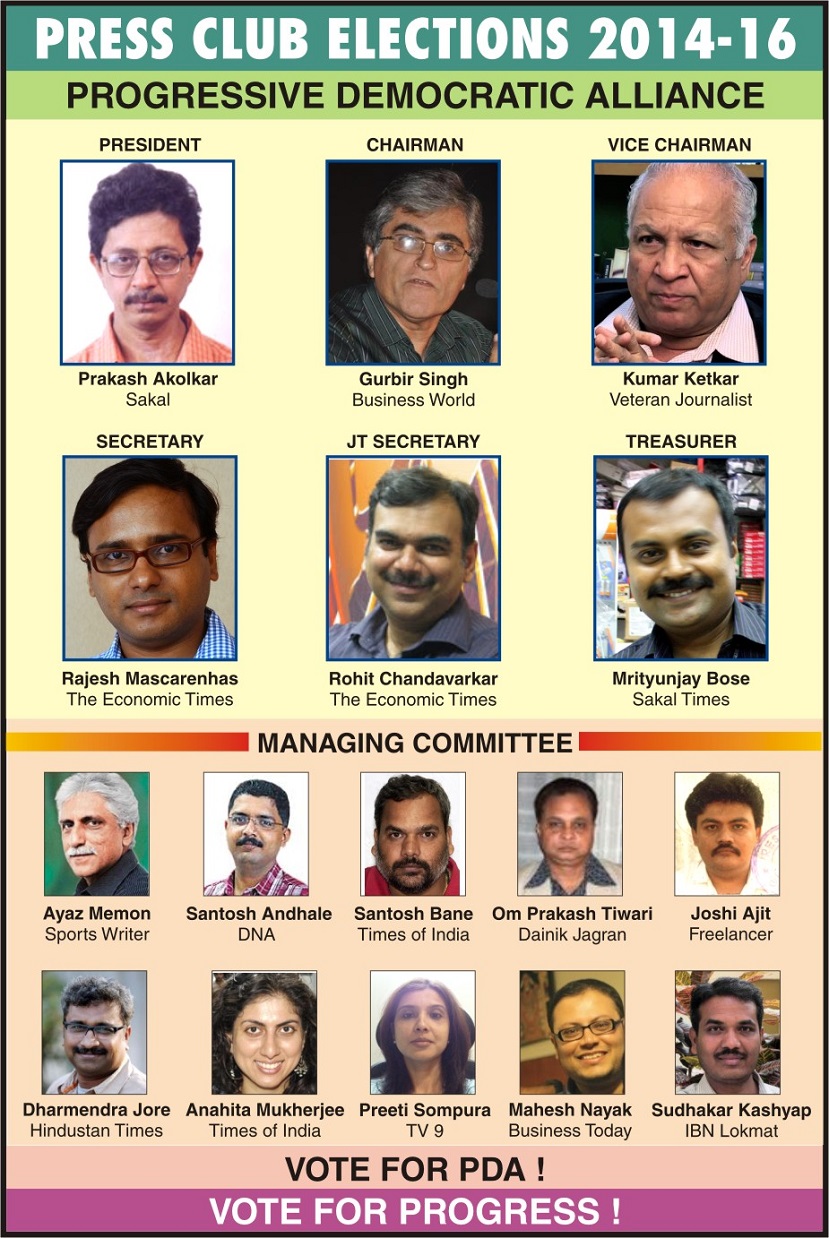 Going forward, the PDA has devised a detailed plan to add more space and beauty to the club. Municipal permissions for rebuilding the club have been granted, and we now have to go for financial closure.  We are also in the process of developing an all-new website, and in days to come all our transactions can move entirely online.

The Club is today a modern, hygienic recreation area you can proudly bring your friends and family to.
The Club is a place where women too feel at home and where women’s causes have a platform for discussion.
The Club today provides professional support to members including a media room with high speed broadband and other professional facilities etc.
The Club today provides top-line entertainment. For instance, 6 weeks of IPL and 5 weeks of World Cup Football was broadcast live on high-definition (HD) big screens.
The Club today is the only institution in India that has run a Film Club successfully for over 11 years without a break.
The Club is the only one in India that uses professionals to train the staff and ensure a high level of property management so that you get the best possible ambiance and service.
The Mumbai Press Club is the only neutral platform that recognizes and honours the true work of journalism through the Red Ink Awards for Excellence in Journalism

Prakash, Political Editor at Sakal has in journalism for the last 3 decades. He joined MT in 1979 and worked in various capacities such as Special Correspondent, Chief Reporter etc. and covered various social, political and cultural events for Maharashtra Times. He is the person how written the first exclusive history of the Shiv Sena’s 30 years a book named ‘Jai Maharashtra’. He has written a book “Mumbai on Sale”: story of Mumbai’s Rise and Fall in last 3 decades.

Senior Editor in Business World. Started writing for Indian Express in 1980; joined The Economic Times in 1982; worked freelance for journals like EPW between 1985 and 1988 before rejoining The Economic Times in 1989. Has served as Hon Secretary both in the Bombay Union of Journalists and the Press Club. Key architect of the new press club and instrumental in getting 230 mhada flats to the press club member’s first time in the history.

Kumar Ketkar is a veteran journalist and with an experience of over four decades in journalism. E has been the editor of Divya Marati, Loksatta. He has also worked for The Economic Times and the Maharashtra Times.

Rajesh currently working as an assistant editor with The Economic Times, has served 10 years in Press Club management as Secretary, Joint Secretary and Treasurer. He has played a major role in the reconstruction of the clubhouse and is instrumental in upgrading the club technology, introducing the email communication system, website, computerized billing systems etc. A 38 year old, one of the active administrators of the club, who has introduced many professional systems including the website, electronic billing, swiping card for staff etc. is instrumental in major fund collection for the club activities.

Rohit Chandavarkar has over 20 years of experience in print and TV journalism. Rohit currently works with the Economic Times as Senior Asst. Editor and takes care of the political coverage for the paper in Mumbai and rest of Maharashtra. Rohit has also worked in news-television and in regional language press. He was a founder employee and Mumbai Bureau Chief of the national English news channel CNN-IBN from Aug2005 to Nov 2010 and led the channel’s coverage during 26/11 Mumbai terror attacks, 7/11 train bombings, 2009 parliament and assembly elections and several other important assignments. Earlier, Rohit worked with Maharashtra Times for over 14 years starting as a reporter in Mumbai and later on holding charge as Editorial Head of the paper’s Pune edition. Rohit has keen interest in photography, aviation and Music.

Mrityunjay Bose currently works as the Assistant Editor of Sakal Times, a Pune-based daily of Sakal Media Group. He heads the Mumbai bureau of the newspaper. In 1995, he started working as a Reporter-cum-Sub Editor with  Career and Business Times, a weekly newspaper. Thereafter, he joined The Free Press Journal and then switched over to United News of India (1996-2004). After his stint with the news agency, he moved to The Maharashtra Herald and then Sakal Times. An M.Com, he has completed his journalism studies from the KJ Somaiya Institute of Management Studies and Research.  He has authored two books – ‘ War Zone Mumbai’ – a book on 26/11 terror strikes in Mumbai and ‘Field Reporting Guide’.

Ayaz has been a journalist for more than three decades and has written extensively on sports, politics, and cinema. After graduating in economics and law from Bombay University, Memon pursued journalism as a career after a chance job with Sportsweek magazine in 1978 while still at law school. A passion for sports — cricket, in particular — influenced his decision not to follow in his father’s footsteps as a lawyer.

Santosh Bane a well-known photographer has been in Time of India for the last 22 years. Currently he is working as National Chief Sports Photographer. He has covered 3 World cup cricket as instrumental in organizing the Press Club photo contest. He has served 7 years as press club managing committee member and office bearer.

Ajit Joshi, having more than 28 years experience in the journalism. He started his carrier with leading Gujarati Daily Janma Bhoomi- Prawasi, he worked for Mid-Day, Mumbai- Mirror, Gujarat Mitra, Chitralekha and few other main streams news papers of Mumbai and Gujarat. Mr. Joshi is also having vast experience of governmental work and also is very familiar with most of important government department like, BMC, MANTRLAYA, and Revenue. He is played a major role in rebuilding the new clubhouse of Press Club.

Santosh Andhale is the assistant editor with DNA and has over 12 years of experience in journalism. The youngest member of the Progressive Democratic Alliance with 33 years old, Santosh is an active member of the press club. He has broken many stories in the Mumbai social sector. He was with Saamna and Mumbai Mirror before joining DNA.

Om Prakash Tiwari is the Special Correspondent in Mumbai of Dainik Jagran, the highest circulating Hindi daily. Prior to joining Dainik Jagran, he was Assistant Editor with the Hindi edition of Blitz. He has been part of Managing Committee of Press Club, Mumbai for five terms. He is a science graduate from Lucknow University and Post graduate in Hindi from Kanpur University. He is also a member of Hindi Salahkar Samiti in Ministry of Commerce & Industry, GOI .

Dharmendra is currently working with Hindustan Times as Associate Editor. He’s in journalism for about two decades. He started with the Indian Express and has covered various beats such as sports and communities. Currently, he is covering political parties and Mantralaya. He’s a well known face in the political journalism.

Priti, an Associate Editor with TV 9, has over two decades of experience in TV journalism. She is currently heading the news bureau and responsible for all the news coverage in India and around the world. She worked with some of the top news broadcasters of India like Zee TV, News 24 Group and now TV 9 in various capacities as a news reporter. During her two decade old career, she has visited countries like Pakisthan, Afghanistan, Somalia, Israel, Mauritius and Dubai as part of reporting assignments.  She has been a close observer of world politics, especially geo-political issues in South and Central Asia.

Anahita has been a journalist with The Times of India since 2005, and has worked in Mumbai and Delhi. She took a mid-career break in 2012-13, where she pursued an MSc in Development Studies at the School of Oriental and African Studies, London. She has, over the years, written on a variety of fields such as education, environment, RTI, child rights and politics. She also blogs on current affairs for The Times of India and tweets @newspaperwalli. She was the winner of the 2010 Sanskriti Awards for Journalism and was also the first recipient of the Australia-India Young Media Fellowship.

A post graduate in Economics from Mumbai University, Mahesh Nayak has been a financial journalist for the past 14 years. He currently works as Senior Associate Editor at Business Today, a part of the India Today group. Prior to Business Today he has worked with Businessworld, Outlook Business, Financial Express and Capital Market Publishers.

Sudhakar, currently working with IBN Lokmat has spent over two decades in journalism. After spending almost 10 years in Mahanagar, he joined television with ETV before joining IBN Lokmat. He was the president of Mumbai Crime Reporter Association. He is also office bearers of many social organisation.