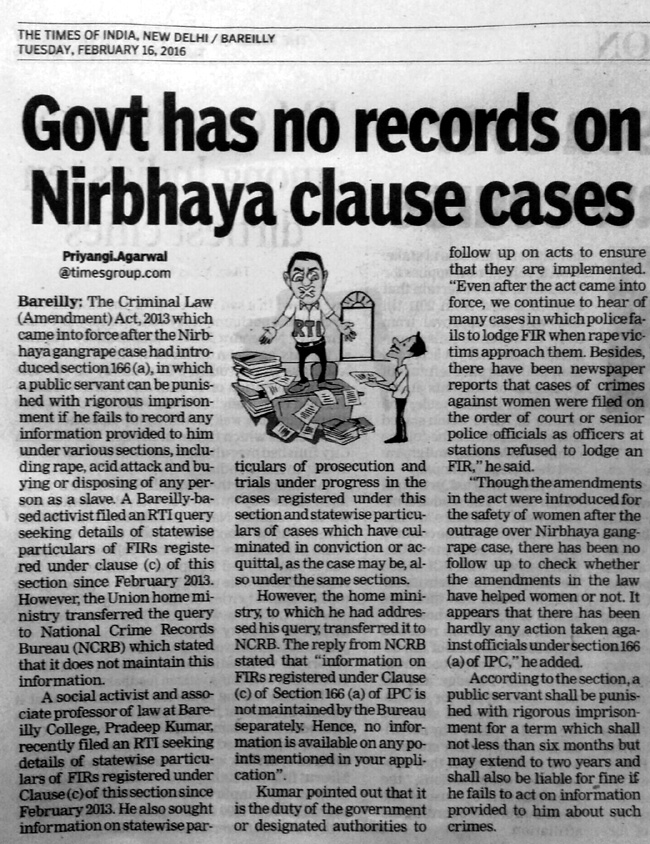 But despite of that, cases of non-registration of FIR  by police cases continue to come in light  and the victims are forced to approach higher authorities or some time courts also.Cases are registered only on later’s intervention. Needless to mention that delay in cases of rape may be fatal for the case in trial court. I have studied some cases. In  first case of 2013 in Thana Bithri Chainpur District Bareilly, FIR of gang rape was lodged after 6 months when the aggrieved victim approached ADG Police Lucknow. We sent the matter to higher police authorities and the UP Govt to register a case under Sec 166 (A) (c) against the SO, but nothing was done.  On dated 03-02-2016, in another case of gang rape FIR was lodged in thana Baradari  after direction of Magisrtate court. In another recent case of Thana Shahi of Bareilly district, police demanded Rs 20000 to register FIR which was ordered by Magistrate. The incident came to light as the demand was recorded in mobile phone. I have cited these cases only for example. I can produce relevant papers relating these two cases. In none of the cases new law was invoked. (Pl see attachments nos. 1, 2 and 3)

On dated 17-11-2015, I filed an RTI with Ministry of Home Affairs (MHA), GOI, seeking details of cases registered through out India, under newly inserted Sec 166(A) (c) IPC, since Feb 2013. But MHA, having no information,  transferred the RTI to National Crime Record Bureau (NCRB). NCRB too replied that “no information was available on the issue”. Their publication ‘Crime in India’ also did not contain any information regarding Sec 166(A)(c).  (See attachment no. 4)

Only case, I found on internet, was registered in Bengaluru on 18.07.2014 in a high profile matter that too after a furore in State Assembly. (See attachment no. 5). After  a period of three years has elapsed since new law came into force, I fear not a single police officer is punished under the law till date.

I trust that  you, as the Honorable Minister of Women and Child Development, will take up the matter at appropriate fora. I also feel that the Government  should conduct a study of such cases and see that this important amendment is enforced in letter and spirit so that complete justice is done to women victims.