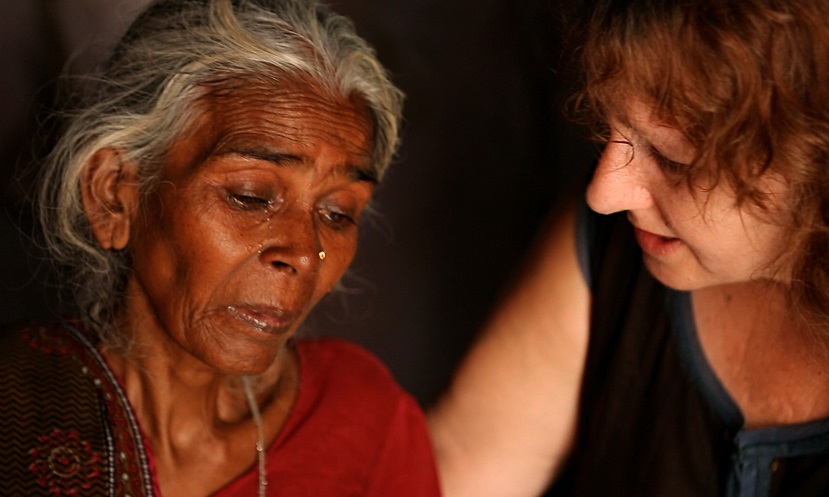 Film-maker Leslee Udwin meets the mother of convicted rapist Mukesh Singh; her other son Ram died while in police custody in connection with the Jyoti Singh case. Mukesh and three other men have been sentenced to death.

“The home minister (Rajnath Singh) blamed the protesters when these were protests on the Gandhian level, peaceful and right and good,” Udwin told the Los Angeles Times. “The irony is it only became violent when the police got involved.”

“The government should hang its head in shame” for the ban, she was quoted as saying in an interview on Monday before the US premiere of her film at event in downtown Manhattan ahead of an airing on PBS later this year.

Udwin, has also denied accusations in the Indian media that Mukesh Singh was either paid for his time or interviewed without his consent. A title card at the start of the film refutes the latter claim.

Actresses Meryl Streep, Freida Pinto, Dakota Fanning and singer Chris Martin were among those at the premiere, an event organized by women’s-rights groups Vital Voices and Plan International at Manhattan’s Baruch College.

The celebrities became involved because of the initial interest of Alan Rickman, who is a friend of Udwin’s and began spreading the word among other entertainers, the Times said.

Streep led a candle-lighting ceremony before the screening, reading some of the victim’s accounts of the assault, then issued a plea to the audience.

“We’re called here to contend with something more than rape,” Streep was quoted as saying. “What is worse than violence? Violence sanctioned by misogyny.”

Pinto, a producer on the movie, told the Times in an interview before the screening that she saw this as “a universal story, and something I got involved with because it’s not just about what happens in India”.

She gave an address after the screening in which she criticised even Western attitudes about the Indian gang-rape, noting a TV script she had been sent recently that contained a joke about it.

She also issued a wide-ranging plea to people as diverse policymakers and teenage boys to shift their thinking.

She closed her speech by asking people to close their eyes and be “bathed in the light, the light that was Jyoti.”

Udwin also took the stage after the screening as part of a panel discussion about women’s rights issues.