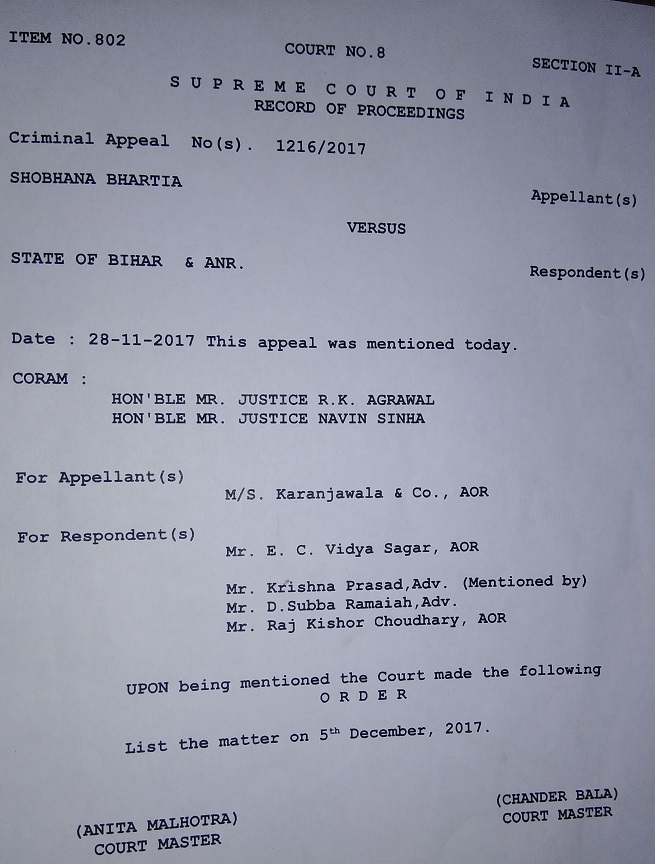 New Delhi : In the globally talked Rs.200 crore Dainik Hindustan Government Advertisement Scandal, the Supreme Court of India, on Nov,28, 2017 , has notified  through its website  that the Supreme Court of India (New Delhi) will list Criminal Appeal No.1216/2017 {SLP(Criminal)No.1603/2013} for hearing in the court of Hon’ble Mr.Justice R.K.Agrawal on Dec 05, 2017 next.

The court of Hon’ble Mr.Justice R.K.Agrawal and Hon’ble Mr.Justice Navin Sinha, on Nov 28, 2017, heard the mentioning and passed an order,” Upon being mentioned, the court made the following order—List the  matter on 5th December, 2017.’’

The senior lawyer of Munger(Bihar) ShriKrishna Prasad,appearing on behalf of the Respondent No.02 (Mantoo Sharma, a resident of Munger, Bihar) of the S.L.P (Criminal) No.1603 / 2013, on Nov 28, 2017, appeared before  the court of Hon’ble Mr.Justice R.K.Agrawal and Hon’ble Mr.Justice Navin Sinha and prayed to the  Hon’ble court by mentioning,” My Lordship, my humble prayer before  the Lordship is to list this case for hearing on any date as it was listed in this court  for Nov 27, 2017, but couldn’t come up in the cause-list.” RTI activist Mantoo Sharma,his lawyer Shrikrishna Prasad and Advocate-clerk (Supreme Court) K.K.Choudhary are seen coming out of the Supreme Court  after mentioning in the Hon’ble Supreme Court on Nov 28, 2017.

The present status of the police investigation in this case:  The Deputy Police Superintendent(Munger) ,A.K.Panchlar and the Police Superintendent (Munger), P.Kannan have submitted the ” Supervision Report No.01 ” and ” the Supervision Report No.02” in this criminal case.In the Supervision Report No.01 & 02,the Dy.S.P and the S.P  have concluded the following facts : “On the basis of facts, coming in course of investigation and supervisions , and available documents in  the Kotwali P.S. case No.445/2011, all allegations  are   prima-facie true against all named accused persons including  the principal accused Shobhana Bharatia .”

Patna High Court Order: It is worth mentioning that the Hon’ble Justice, Smt. Anjana Prakash , in the Criminal Miscellaneous No. 2951 of 2012( Smt. Shobhana Bhartia ,Petitioner Vs (1) State of Bihar,(2) Mantoo Sharma,Munger & others)  on Dec, 17, 2012, has rejected the petition of the accused person, Shobhana Bharatia and others  and has directed the Munger Investigating Police officer to expedite the investigation and  conclude the  same within a period of three months from the date of receipt of this order.