As a senior member and old voter and as a working journalist for over three decades, I was shocked and pained when you told me that you will not renew my membership for the Press Association, New Delhi. While finalizing the voters list last month you deleted many names of senior voters and also denied new membership. There are more than 4000 accredited correspondents. But your members are less than 400. This means 90% are out of the Press Association list. Thus you sought to manipulate voters list to secure your re-election. This smacks of your feudal mindset. The Association is not your fiefdom.

I can easily gauge your chagrin. I have been persuading you for long that you must, as secretary, recover the legal status of the Press Association. You refused to pay any attention. Now see what happened due to your lethargy. The Press Association has lost its status as a legal entity. The Registrar of Societies, NCT of Delhi Government, has terminated our Registration, only because you repeatedly failed to file before him the statutory annual returns. An official statement (in reply to an RTI query) from the NCT-Delhi government confirms this.

You know very well that under Rule 4 of the Societies Registration Act, 1860, the registered society has to file in every January its annual returns, which include the audited accounts (approved by the general body), minutes of all meetings, list of managing  / governing body members etc. The designated authority of the Delhi Government says that you have not filed even a single paper all these years to update/renew the registration number: S-2887. When you got into the Press Council for the second consecutive term in 2014, you knew that you were committing an illegality by seeking nomination from an organization dead under the statute. Still you did nothing to rectify the error. For your information the reply under an RTI query from the Delhi Registrar of Societies is enclosed. 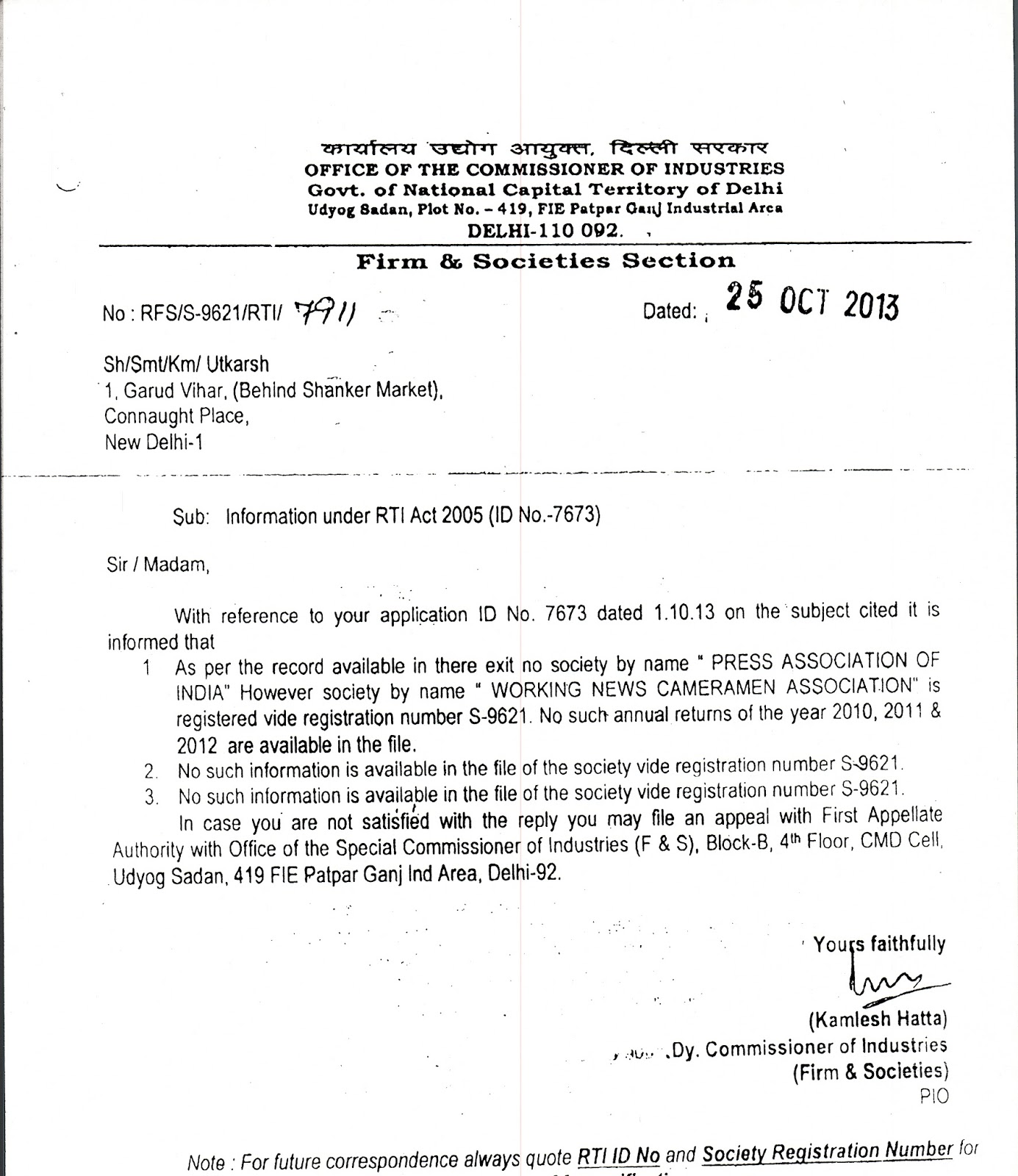 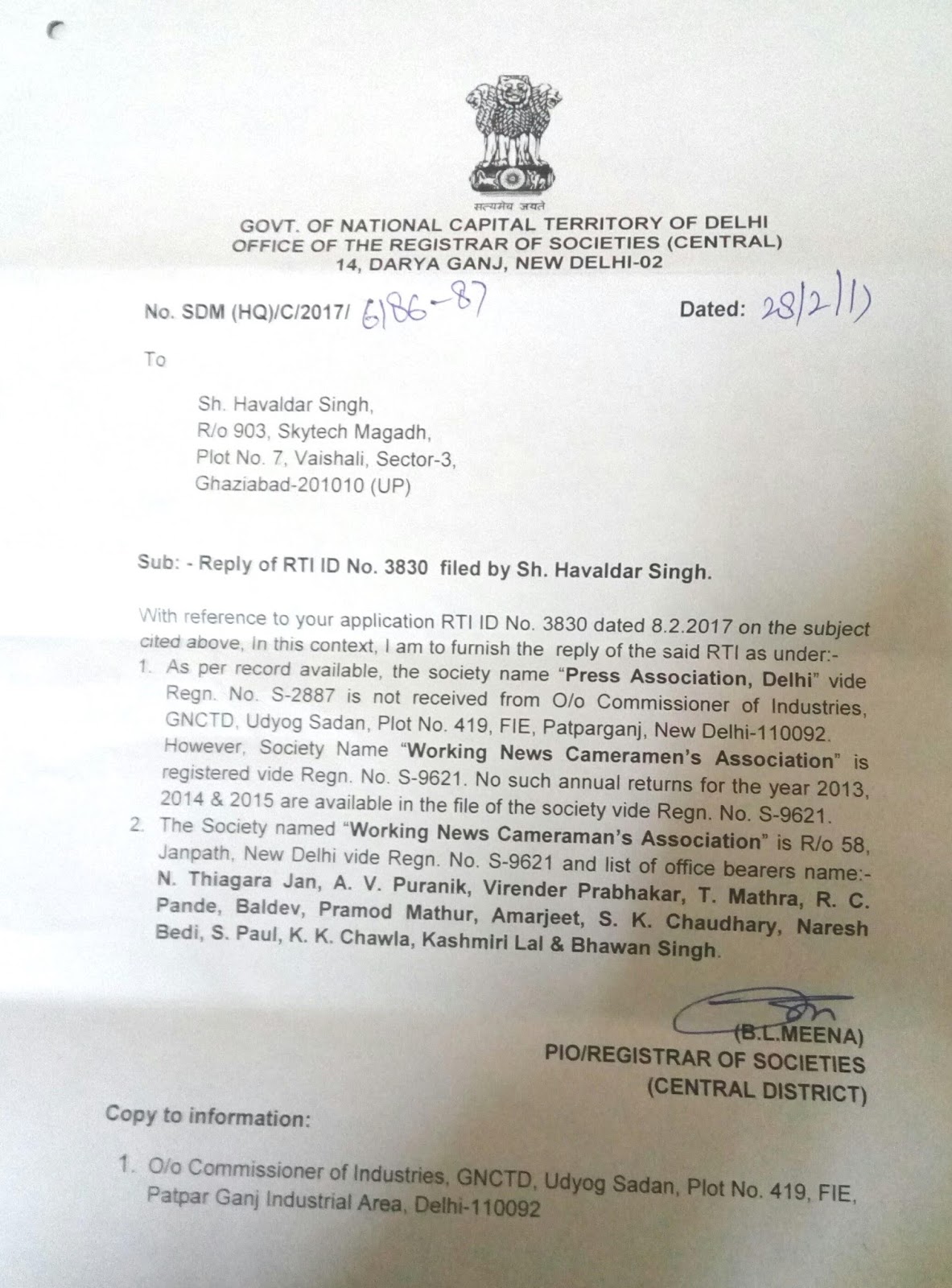 Mr.Nag, I need not tell you, a seasoned organization man, that if a registered society loses its legal status, upon the lapse of registration, it loses recognition of the statutory bodies like the Press Council, CPAC (P.I.B.) and also the right to operate the Bank account and occupy government-allotted office place.

A registered society must have a registered office for communication, including legal notice. The Registrar of Societies in reply to the RTI query has said that the Press Association has not given any address. Only the Lounge of the P.I.B. is mentioned as its office. How can a public/Government place be a registered office of a private society? Moreover, the objective (c) in your constitution underlines the need to maintain “Independence of the Press”. Can you do this from the P.I.B. lounge?

You became smug after you got into the Press Council for the second consecutive term in 2014. You and your cohorts had wilfully destroyed a noble and democratic tradition of the Press Council. The scrutiny sub-committee always had as its members the nominees of the University Grants Commission, Sahitya Akademi and the Chairman Bar Council of India. The Chairman of the Press Council, (a retired Supreme Court judge) was its president.

These unattached members used to examine each and every claim honestly and dispassionately. But you and your partners forced yourself on the Council and gatecrashed into the scrutiny sub-committee. Thus you settled your intra-organisational scores with fellow media bodies. You even went to the extreme in the Press Council meeting on 17th January 2017 when you forced the Chairman and Secretary to leave the hall. And then you got yourself included in the new scrutiny sub-committee for the 13th term of 2017-20. You have thus denigrated the entire Press Council of India for your own selfish purpose.

As you were judge of your own claim application in the scrutiny sub-committee, you thought you can repeat your illegal acts without being noticed. The consequence is that now the Delhi High Court is examining the whole matter. A judgment is awaited soon on the 12th Press Council which ends in October 2017, eight months more.

(Your fraudulent nomination is challenged in this writ petition No:3384/2014.)

You were complacent that by getting your manufactured documents, attested by the Notary Public (in November 2016), you can legitimise your fake submissions to the 13th Press Council. Your lawyer will tell you that a Notary Public attests what you (Deponent) tell him. A Notary has no machinery to verify what you tell him. The simple issue, you must know, is who is legally authentic: the designated authority like the Registrar of Societies of Delhi-NCT Government, or a private vakeel, nominated just for two years as a Notary. The Notary will even attest if you tell him that you are the Chief Editor of the Washington Post in Delhi.

You know that a false Affidavit invites penal action for perjury, forgery, fraud and impersonation. Already lawyer Parmanand Pandey has during the last two years had convinced the Delhi High Court that the Press Association was dead.

You have seen how another fraternal body, the Indian Journalists Union, a registered Trade Union, has been since 2011 battling in the Patiala House District Court. The IJU factions are led by Mr. Suresh Aukhori and Mr. K.B. Pandit versus Mr. S.N. Sinha and Mr. D. Amar. The Registrar of Trade Unions, Canning Lane, New Delhi, has received in 2016, the annual returns from both the groups but he has not recorded in his official register either Suresh Aukhori or S.N. Sinha as IJU President.

The I.J.U. is no more a legal entity as per Section 28 (2) of the Indian Trade Unions Act, 1926. The membership of the Press Association includes members of the Indian Journalists Union, the National Union of Journalists (I), the Indian Federation of Working Journalists (IFWJ) etc. But you acted on your own very arbitrarily by openly aligning with the I.J.U. (Mr. S.N. Sinha faction) in the Press Council nominations. Thus you destroyed the basic neutrality of the Press Association in intra-union rivalries of the journalist trade unions.

Mr.Nag, the Press Council has asked applicants to submit detailed lists of their members, residing in 12 states with their surname first, residential addresses etc. You have shown that the Press Association members live in 12 states. How can it be? Your constitution says that only those accredited to the P.I.B. alone can become its members. The P.I.B. rule No:6.2 says : ( pib.in/prs/ accreditionguidelines.pdf ) “Accreditation will be granted only to those residing in Delhi or its periphery”. So how do you reconcile this contradiction? The Press Association has been trotting an argument that its members work for various newspapers of different states, though living in Delhi, so it has an all-India character. This is plainly ridiculous. The Press Association nominees belong to Section 5(3)(a) of the Press Council Act, 1978, for the working journalists. Newspapers come under Section 5(3)(b) owners/managers of newspapers.

I wait for your action.

N.B.: I am circulating this letter among our members because it concerns the entire Association. Thanks.