i am Pankaj arora from Rudrapur Uttrakhand father of victim (Master Yash Arora age 10year) who died due to negligence in Medanta The Medicity & who had provided subsidized treatment by recomandation of ex CM Haryana Hon B.S. Hudda due to my week financeal condition conceqence of the accused provided sub standard post liver transplant care to my child i.e …

4- Unethical use of drugs i.e.. the victim had administreted or prescribed those drugs which pediatric safety and efficasy was not approved by medicinal authorities.

police & MCI complaint has registered in thana sadar Gurgaon but Gurgaon police had not listen to us then the FIR was lodged by Court orders u/s 156(3) against Medanta Administration and entire liver transplant team u/s 304A , 304 ,468 ,471 ,34 under IPC act but due to infulance of Medanta no any appropriate action taken by any authority till the date .Thanks to electronic & print media who raised my voice. 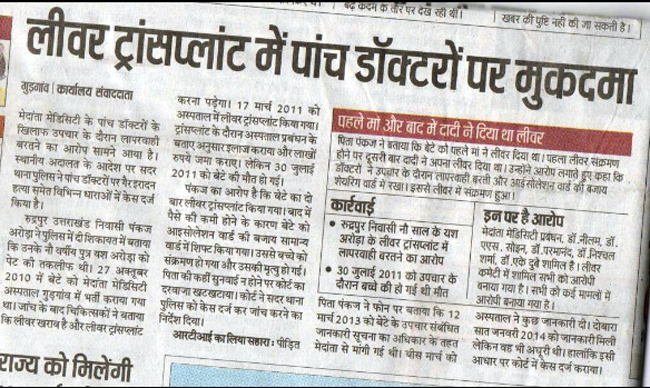 A ugly face of Medanta- The Medicity, MH1 News: http://youtu.be/ZJr_vGDZJVQ

I want to appeal to Hon PM & Hon health minister through Zee news so that we can have justice for our son Yash Arora & other inocents who lost thier lives due to such greedy doctors of Medanta hospital. I ill be very thankfull to you if you ill support me for justice to my died child & for those inocents who lost thier lives for the same cause. Thanks

Medanta- The Medicity or The Murdercity!