While iDTV are available in plenty like Sony, LG, Panasonic, Samsung etc., the dongles are also available in online Shopping sites like FLIPKART, Ebay, Snapdeal etc. It requires the user to download the softwares and plug these dongles in the smartphones and tablets to receive DD Signals. There will be no charges for watching the DD Channels. Also, no internet is required after installation of the software. The Public and private transportation vehicles and public places are potential environments for Mobile Television. Currently DD National, DD News, DD Bharati, DD Sports, DD Regional/DD Kisan are being relayed. Only one time investment of Dongle will be required by viewers and no extra expenditure unlike streaming with internet. The TV pictures are free from “ghosting” and “snowing”.

Digital Terrestrial Television (DTT) secures greater plurality in Platform ownership, ensuring that no single platform owner is so powerful that they can exert undue influence on public opinion or political agendas. The digital transition offers an opportunity to increase the production of local content. This in turn creates job opportunity and increase creativity and entrepreneurship. A strong DTT platform is critical for healthy competition in the TV market and to the realisation of a wide range of social benefits and most essentially an all weather reliable platform. There is no risk of catastrophic failure of total network. It provides alternative distribution platform.

Television has strongly shaped the lives of Indians for decades – from black & white TV of the late 50s, it has changed to colours and now in the latest stage with digital terrestrial TV DD channels can be received in smart Phones, tablets and in moving vehicles. The new audience on move are the key beneficiary of this technology. Currently, mobile TV can be received using a dongle for mobile and tablets. But the day is not far when it will be embedded inside the devices. Watching TV from a phone is interested in many situations. Public and private transportation vehicle in public places are potential environment for mobile TV services. In the DTT Transmission everybody watches the same content at the same time and it guarantees everybody the same high level of service, since they are all bathed in the same signal. So Tablets and smartphones and moving vehicles find new way of watching DD Channels in India in 16 cities, which are going to increase in near future. 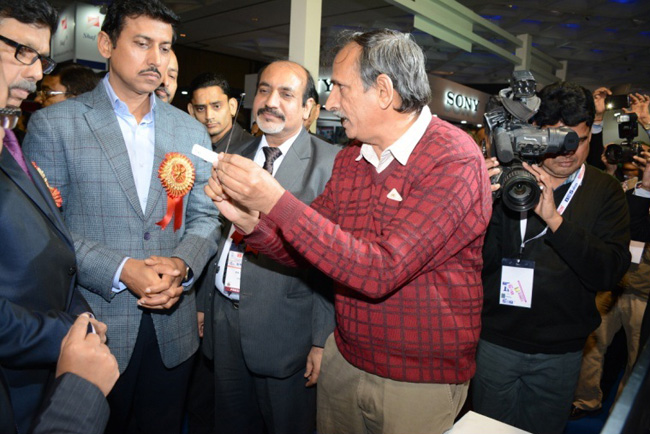