To:
Team of Bhadas4Media.com
CC:- All members of the Press Club of India situated at 1 Raisina Road, New Delhi.

SUBJECT:- Forgery committed by PCI Secretary-General Nadeem Ahmed Kazmi by tampering the “Minutes of the Meetings” Register with the intention of producing false evidence before the court of law. Thus, putting the reputation of our prestigious club at stake.

PCI Secretary-General Nadeem Ahmed Kazmi has committed the biggest ever forgery on the Press Club India, and its members, by tampering with the pious document of our Club – “Minutes of the Meetings” Register, and producing the forged Minutes before the court of law in an ongoing legal case – “PANKAJ YADAV Vs. (1) PRESS CLUB OF INDIA & (2) NADEEM AHMED KAZMI”. Thus, putting the reputation of our prestigious club at stake. Please find two attachments along with this mail, namely “True Minutes” and “Forged Minutes”. 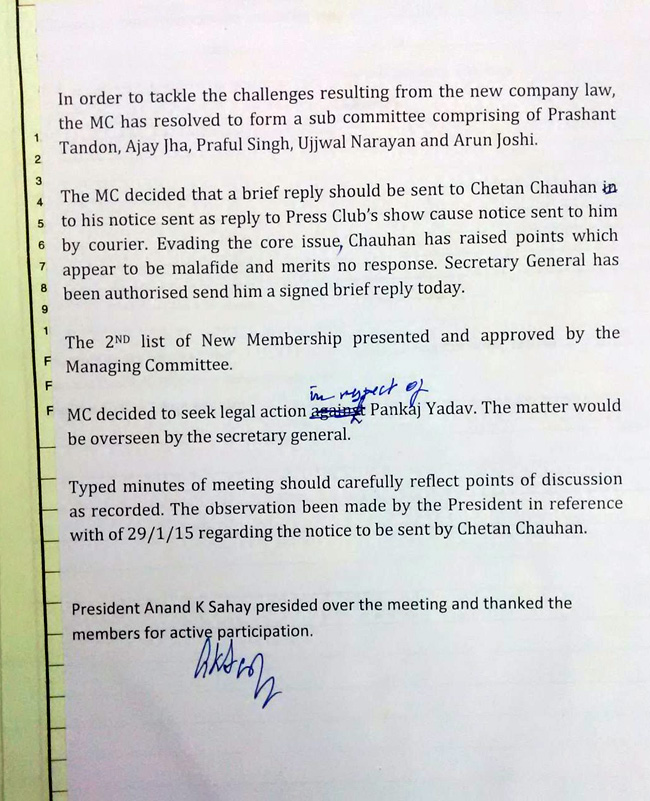 The first attachment named “TRUE MINUTES” contain the real minutes which were genuinely written during the meeting of the Managing Committee held on March 24, 2015, and duly signed by the then President of the PCI – Anand Sahay.
Whereas, the second attachment named “FORGED MINUTES” contain the tampered minutes and signed by none other than Secretary-General Nadeem Ahmed Kazmi. Interestingly, the signature of the then President – Anand Sahay who presided over the meeting, are missing in this forged document….!!

NOTE: It is urged upon you all to carefully go through the FOURTH paragraph in each of the Minutes, attached along with here, and see for yourself how tampering had been committed with the most sacred document of our reputed PCI, called “MINUTES OF MEETING”. And, the forged document is signed by none other than PCI Secretary-General Nadeem Ahmed Kazmi himself, and already produced before the court of law.

Considering the fact that by indulging in such an act, PCI Secretary-General Nadeem Ahmed Kazmi has put the reputation of our Club at stake, it is urged upon the present MC of the PCI to take a stern action in this regard. This tampering of Minutes register should be thoroughly investigated and the guilty, i.e. Nadeem Ahmed Kazmi, should be thrown out of this esteemed Club for life, at the earliest.