Aman Sethi ‏@Amannama
All I know is Tejpal possibly assaulted young interns while working on my team , says Vinod Mehta in his new book 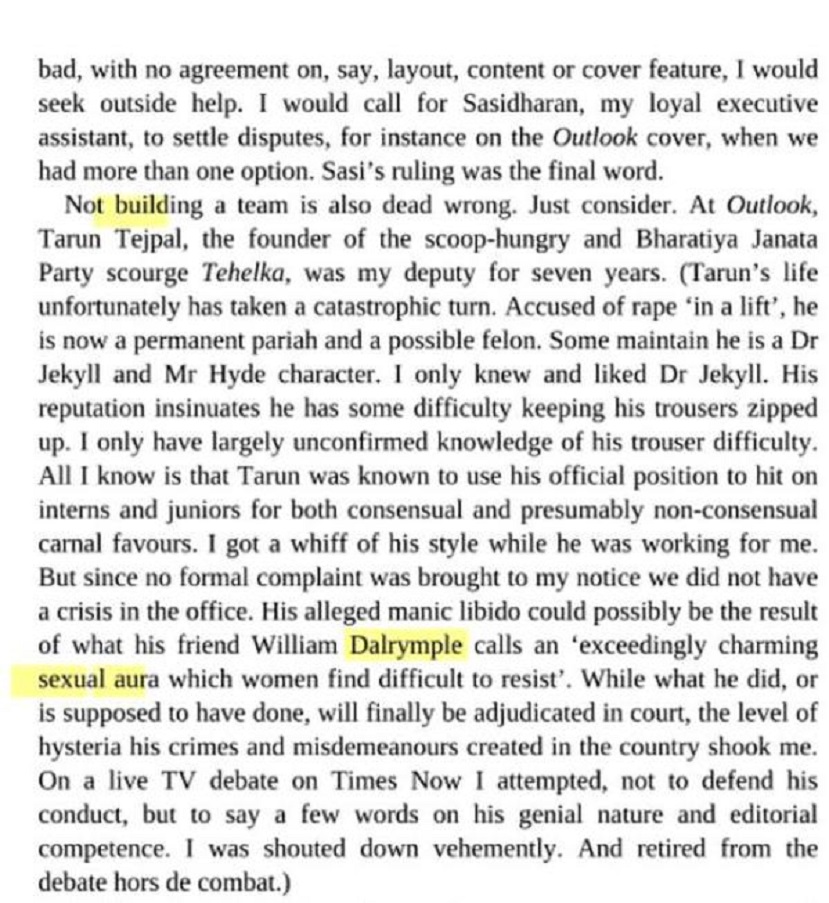 Looks like more trouble is brewing for former Tehelka editor, Tarun Tejpal. Eminent journalist Vinod Mehta in his new book has reportedly written about Tejpal’s possible non- consensual sexual relations during his time in Outlook. This has created a storm on social media and many journalists are coming out with veiled responses which seem to indicate there may be some iota of truth in Mehta’s claims.

Vinod Mehta’s book, ‘Editor Unplugged’ is due to release shortly. Like his past memoir, in this book too, Mehta has given a ringside view to the inner workings of the newsroom with special mention to various noteworthy controversies like the Nira Radia case etc.

On Friday, journalist Aman Sethi tweeted a page from the new book which says that all Vinod knew was that Tejpal used his official position to hit on interns and juniors. But the damning bit is about a reference to presumably non-consensual relationships. However, Vinod Mehta never started any probe into these supposed shenanigans as no official complaint was ever lodged, he says.

Vinod Mehta even has a reasoning for Tarun Tejpal’s ‘alleged manic libido’. He quotes author William Dalrymple to have reportedly said that Tejpal had an ‘excessively charming sexual aura which women find difficult to resist’. However, just after the controversy broke, Dalrymple has tweeted to promptly deny ever saying something like that.

William Dalrymple @DalrympleWill
I’ve never said the quote attributed to me in Vinod Mehta’s book &have asked for it be deleted from future editions..

To Whom It May Concern

It has come to my attention  that in his new book Editor Unplugged published by Penguin India, Mr Vinod Mehta has stated that Tarun Tejpal’s “alleged manic libido could possibly be the result of what his friend William Dalrymple calls ‘an exceedingly charming sexual aura which women find difficult to resist.'”

This is not a statement I have ever made, either in speech or in writing, nor is it something I believe. This note has been communicated to Mr Mehta and his publishers asking them to take the quote  down from any online version and any future editions.

However, various journalists tweeted, tacitly implying that there may be some fire in all the smoke generated.

Mihir Sharma @mihirssharma
@amishra77 shameful as, like your party leader Modi, Vinod chose to ignore such reports about a subordinate. You should quit BJP in protest.

However, neither Tejpal nor Mehta has so far commented on this controversy. Tejpal’s image, already much sullied in the public eye, will take a further hit if Mehta has indeed written anything incriminating in his book.

Accused of raping one of his juniors at the Think Fest in Goa last year, Tarun Tejpal is currently out on bail, mostly ostracised by media and the civil society alike.