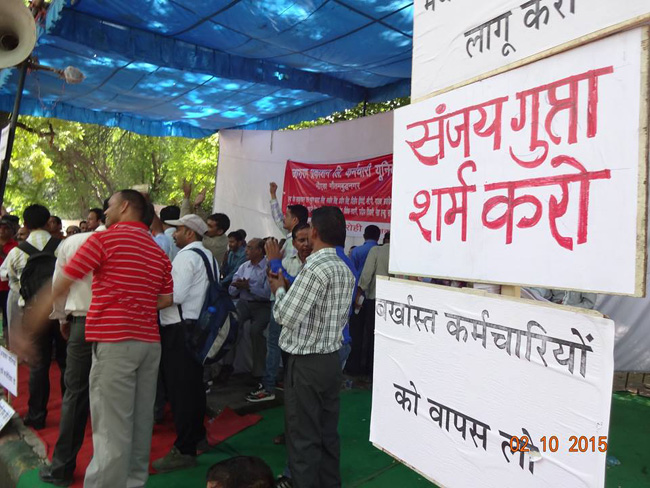 Thousands of journalists and non-journalists of various newspapers today staged adharna at Jantar Mantar in support of the struggling employees of Dainik Jagran against the atrocities of its Management. The Jagran Management, known for its anti labour trade practices, has unleashed the reign of terror and victimisation of the employees. This newspaper’s Management has firstly obtained signatures of employees by force and fraud on different dates to deny them Majithia Award is now suspending, transferring and terminating the employees so that they do not unionize and raise their voice for their genuine demands.  The shameless Jagran Management has summarily terminated the services of 16 employees of NOIDA without following the due process of law but strangely, the UP government’s Labour department is sitting silent. So much so, the Management is using the state police to oppress the agitation of the employees.

Indian Federation of Working Journalists (IFWJ) has strongly condemned the managements’ action of victimization of employees and has extended its wholehearted support to their struggle. Addressing the rally, the IFWJ’s Secretary General Parmanand Pandey has asked the UP government to immediately prevail upon the Management to revoke the termination of all 16 employees; most of them are the office bearers and the active members of the Union. The government must start the prosecution of the Management for throwing the law of the land to the wind.

Employees of the NOIDA edition of Dainik Jagran have been compelled by the Management to go on strike against the provocative action of the Management, which has started from today itself. The employees of Dainik Jagran of other centres of Punjab, Himachal and Haryana also joined the agitation at Jantar Mantar. Among others who addressed the dharna of the Jagran employees were Swami Agnivesh of Bandhua Mukti Morcha, R P Yadav of the IFWJ,  Chandan Rai of the Delhi Union of Working Journalists, Prashanth Reghuvamsom  of the Kerala Union of Working Journalists and Piyush Bajpai of the Indian Express Employees Union.