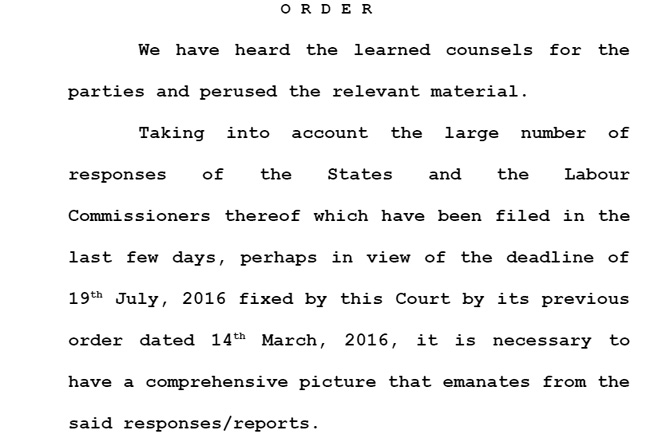 UPON hearing the counsel the Court made the following

We have heard the learned counsels for the parties and perused the relevant material.

Taking into account the large number of responses of the States and the Labour Commissioners thereof which have been filed in the last few days, perhaps in view of the deadline of 19th July, 2016 fixed by this Court by its previous order dated 14th March, 2016, it is necessary to have a comprehensive picture that emanates from the said responses/reports.

Shri Colin Gonsalves, learned senior counsel who appears on behalf of some of the Employees’ Union, has submitted that he would file a comprehensive report on all the issues involved in the case(s) so that effective orders can be passed by the Court.

Learned senior counsel, Shri Gonsalves, is requested to do so.

On the next date fixed, we propose to take up the cases pertaining to the States of Uttar Pradesh, Nagaland, Manipur, Himachal Pradesh and Uttarakhand in the first batch.

The Labour Commissioners of the aforesaid States shall be present on the said date. The Court will hear arguments on the issue relating to clause 20(j) of the Majithia Wage Board Recommendations in the context of the relevant provisions of the Working Journalists and Other Newspaper Employees (Conditions of service) and Miscellaneous Provisions Act, 1955 and thereafter proceed to examine the issue of implementation of the Wage Board Award in the concerned State.

The Labour Commissioners of the above-named States, therefore, are directed to ensure that all pending applications/issues before them are decided and appropriate orders as required are passed thereon so that the said authorities are in a position to apprise the Court accordingly.

As prayed for, liberty is granted to the parties to file their respective responses to the affidavits filed by the States/Union Territories/Labour Commissioner(s).