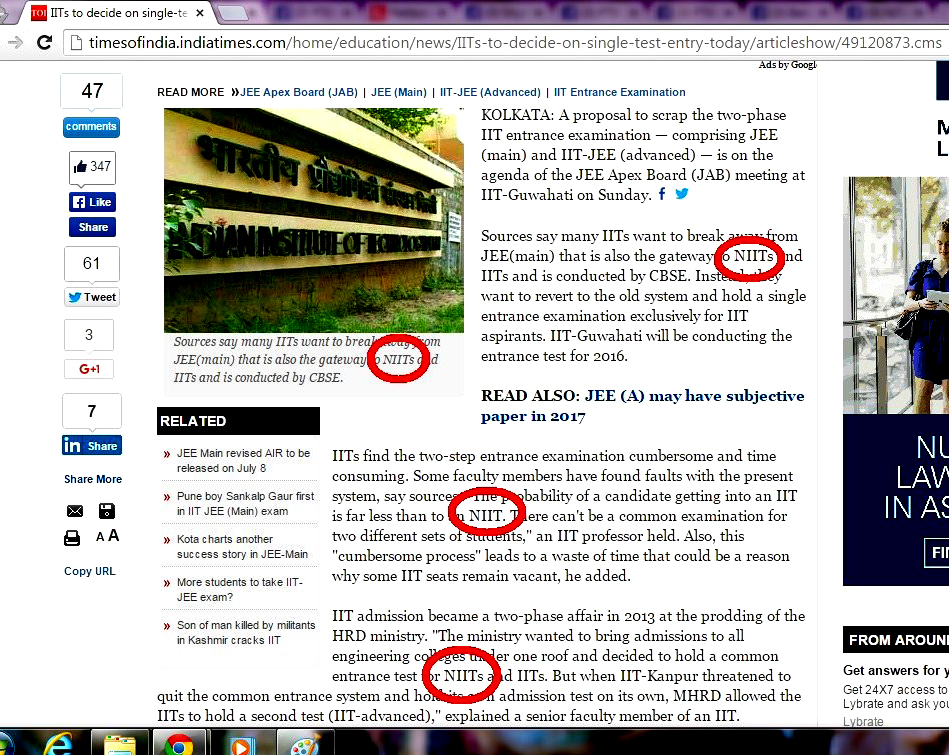 Since the time I remember, one thing that comes to my mind is the newspaper vendor flinging Times of India at the main gate of my house. I was an avid reader of prominent national daily, The Times of India. The exclusive coverage of issues of national importance always fascinated me. The idea of switching loyalty to any other national daily didn’t even cross my mind. I would have labelled that an exceedingly absurd thought. Today, in the hustle and bustle of college life, I somehow carve out time to login Times Of India on my laptop and go through the electronic version of it. It was my love for Times Of India that drove me crazy.

One fine morning on 27th September 2015, I was reading TOI’s article on “Single Test for IITs”. The issue was of special interest to me because I had also gone through the competitive engineering exams last year. The crux of the article was that the government is mulling over the idea of common entrance test for IITs and NIITs. Surprised…? Same was my reaction when I read this line. A literate Indian can easily figure out by virtue of his common sense that the government wants to table the proposal of a common examination for IITs and NITs. Sadly, third largest newspaper daily, The Times Of India, doesn’t even know the difference between NITs and NIITs, let alone the claim of being the trendsetter that adheres to the highest standards of journalism. The error was not at a single place. TOI has committed this gaffe three times in an article of barely 400 words. The word NIT did not even feature in the article. They have simply assumed that NIITs are equivalent to NITs.

As a responsible citizen of India, let me clearly draw a line between the NITs and NIITs so that heedless Indians and Times Of India don’t make a blunder in future. NITs are institutes that are funded by the central government of India. They are “Institutes of National Importance” declared by the Ministry of Human Resources and Development. To name a few, courses like Computer Engineering, Mechanical Engineering, and Electrical Engineering are dealt with here. The courses in NITs are accredited by National Board of Accreditation. The labs here are funded by World Bank. The students here belong to top 0.5 percentile of India. The teachers in NITs are globally acclaimed. On the other hand, NIIT is a private computer institute for training people so that software firms can hire them. Here only courses such as Java, C# are offered. Even though both institutes are differentiated by a letter “I” there is a world of difference between them.

Times of India should realise that NITs feature in the best colleges of India. I hold no grudges against NIIT, but it is unethical to link two institutes of completely different stature. Indian society believes that IITs are the only premier institutes of India. Times of India has unfortunately contributed to this myth. If professionals working in Times of India don’t know this, it would be a crime to expect a positive response from 13.5 million readers of Times Of India. NITians have proved that this notion is wide of the mark. NITians are at par with the society labelled prodigious IITians. NITians fetch placements in the elite companies of the world. Many of them are successful entrepreneurs. There is only one NIT in a state and a student is expected to burn the midnight oil to get into it. Combating for a seat in it takes a toll on the mental level of a student. In return, NIT is compared with nascent NIIT which is an insult to NITs and the setup which is more than half a decade old.

So, as a NIT student from the platform of “Proud To Be An NITian” on the behalf  of NIT fraternity comprising of 50000 students presently studying in them and thousands who have passed in the last 50 years, I would request you to not use this in future. Confusion between NIT and NIIT just shows your utter ignorance about technical education institutes in India. Had Times Of India added the letter “I” in IIT and printing it as IIIT, massive protests would have erupted. The Times Group would have tendered an apology. But no outrage was observed after TOI committed this blunder. It doesn’t give Times Of India a leeway. We expect an apology from the Times Group. It would, in fact, be a step by TOI towards regaining the confidence in NITians and its readers. (साभार- ptbn.org)