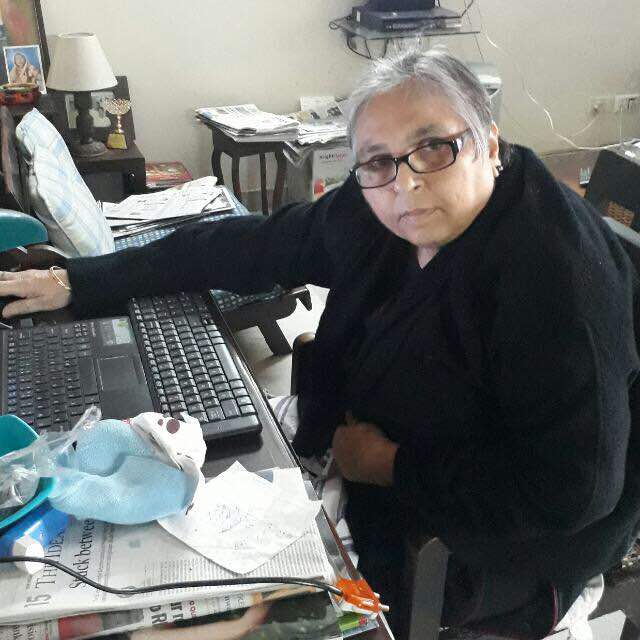 An audacious journalist, Nora Chopra, was given a loving farewell by colleagues, family and friends at a memorial meeting held at the Delhi Union of Journalists’ office on April 27, 2017.  Nora’s brother journalist Shahid Abbas  described her as a ‘bebaak’ journalist who could get away with asking politicians and government officials the most audacious questions.

He recalled her early life in Allahabad, her marriage and move to Delhi and her struggles to bring up two children on a freelancer’s uncertain income.  In the past four years she had developed Parkinson’s disease but doggedly carried on her journalism, often typing her pieces on a laptop or dictating them.

Nitya Chakrabarty recalled her extraordinary commitment to her work and the discipline with which she sent in her column ‘Political Delicacies’ to the India Press Agency (IPA) every Thursday.  In 15 years, he said, she rarely missed a deadline.  He was editing her column on Thursday, April 20, when he received the news that Nora had passed away that day.

Her son Rahil Chopra said she had done two columns on the day she was admitted to hospital. His father had insisted that he email them at night, one to the IPA and the other to Punjab Kesari, lest Nora get upset at the delay.

Journalist Faraz Ahmed, who is Nora’s cousin, recalled how they grew up as the children of two brothers, both fiercely nationalist freedom fighters, one of whom joined the Communist Party while the other was with the Congress and later the Socialist Party.  Faraz   joined journalism and Nora was inspired to also take up the profession. He recalled that at different times in their careers they worked together; at one point in ‘Meantime’ magazine, later with Tehelka.  “Nora was bubbling with energy,” he said, “she never lost her excitement for journalism, she was always on the ball, on the move, nothing could put her down. Until she was finally laid to rest.”

Suresh Bafna remembered that Nora began coming to the INS building as early as 1989, she had the special quality of making friends readily and developed a range of contacts and news sources. She reported objectively, not bogged down by political or ideological hang-ups.  Umakant Lakhera recalled her honest, direct ways and her interest in the craft of writing. She knew every politician in town, he said, and would often ring him up to demand the latest political gossip for her columns.

Papri Sriraman said Nora knew the art of conversation and friendship. They had discussed her plans to write a book but sadly she was unable to finish writing it. DUJ General Secretary Sujata Madhok recalled how she would attend meetings, book launches and other events in a wheelchair, undaunted by her illness.

DUJ President S.K. Pande read out a tribute on behalf of the organisation, saluting Nora Chopra’s fighting spirit, her love of the profession, her political savvy, her secular commitment and crusading zeal for the causes that she believed in. She had been a DUJ activist and the organization will miss her contribution, he said.