The Supreme Court of India has taken cognizance of the contempt petition filed by the Indian Federation of Working Journalists (IFWJ) on behalf of the employees against Shri Sanjay Gupta, the CEO of Jagran Prakashan Limited. The bench of Justices Ranjan Gogoi and Rohinton Fali Nariman directed the Management of Jagran Prakashan Limited on 13th October to comply with the order of the court for the implementations of the Majithia Wage Boards recommendations within two month, if the same has already not been done. 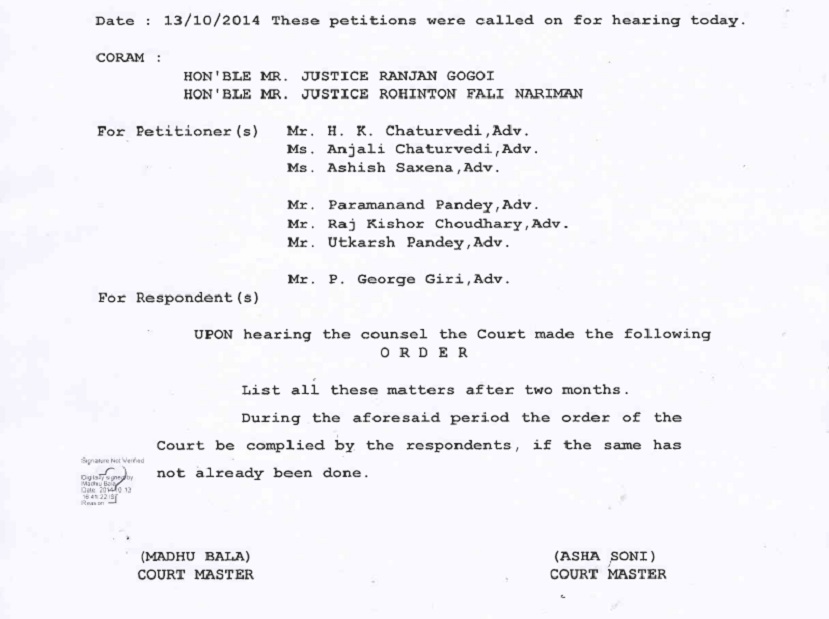 Three employees of the Dainik Jagran, Avishek Raja, Ashok Kumar Rana and Sandeep Kumar Rai have said in their contempt petition that the Jagran management is guilty of willful and deliberate disobedience of the verdict of the Hon’ble Supreme Court.  The judgment of the Hon’ble Court was pronounced on 07th of February 2014 by the three-judge bench headed by the then Chief Justice P. Sathashivam consisting of Justice Ranjan Gogoi and Justice Shivakirti Singh.

It may be recalled that by dismissing all writ petitions of the top newspaper barons of the country, the Supreme Court had directed for the implementation of all recommendations without any change, with effect from 11.11.2011. Only some have implemented Wage Boards recommendations, many newspapers have not properly complied with. The biggest felony has, however, been committed by the Jagran Prakashan Limited, which claims to be highest read newspaper not only of India but also of the whole world in any language. This newspaper was also one of the petitioners, which impugned the Wage Boards recommendations before the Supreme Court.

Dainik Jagran has deep and pervasive readership in Uttar Pradesh, Uttarakhand, Himachal Pradesh, Punjab, Jammu & Kashmir, Haryana, Madhya Pradesh, Rajasthan, Bihar and Jharkhand. Jagran Prakashan Limited is the worst violators of labour laws and this time again; it has shown the temerity and the audacity by not even responding to the requests of employees to implement Majithia recommendations. What is even more shocking is that the management has taken the despicable recourse to harassing, victimizing and intimidating the employees.

After the pronouncement of the landmark judgment of the Hon’ble Apex Court, the management has brazenly removed dozens of employees, journalists and non-journalists included, and vindictively transferred many of them to insignificant places. The employees of Dainik Jargarna are living in the atmosphere of perpetual fear and terror. The counsel for the employees Parmanand Pandey, who is also the Secretary General of the ‘Indian Federation of Working Journalists’ (IFWJ) has stated with documentary evidence that the Dainik Jagran management is not paying even the fragment of salary and allowances to its employees, which has been recommended by the Wage Board.

According to latest balance sheet submitted by the newspaper to the Company Law Board (CLB) the annual turnover of the company is more than Rs. 1700/- crore and thus the Dainik Jagran newspaper falls in the category of the class I newspapers but the employees are deprived of even the minimum basic facilities and wages. The management of Dainik Jagran is known across the India for its notoriety, mischief and bloodsucking exploitative methodology against employees. This newspaper prominently claims on its masthead to be published from 35 centres from all over India but the number of regular employees does not go beyond four digits altogether. Most of the employees are appointed on the contract basis and they are paid abysmally low wages. Journalists are compelled to work much beyond the working hours than the prescribed under the Working Journalists Act, 1955.

The Apex Court will certainly take serious view of its contempt if Dainik Jagran management again fails to abide by the law of the land.

Attached: Copy of the order of the Supreme Court