The dexterous hand that held the brush that moved and captured the soul of India on the paper has stopped moving forever. 2015 is a year which will be marked for two major blows to the world of cartoons and the cartoonists. First the Charlie Hebdo massacre then the sad demise of our Legendry cartoonist Mr. R.K. Laxman whose  infallible strokes were instantly identifiable and his common man holding the iconic stature in the mindset of readers is the most familiar figure. Mr. Laxman stirred the world of politics by his brilliance and brought forth its stark realities lacing it with a pinch of humour here and a dash of satire there His common man is the ubiquitous silent observer who remains apathetic towards the vagaries of political upheavals, rampant corruption or financial crises. 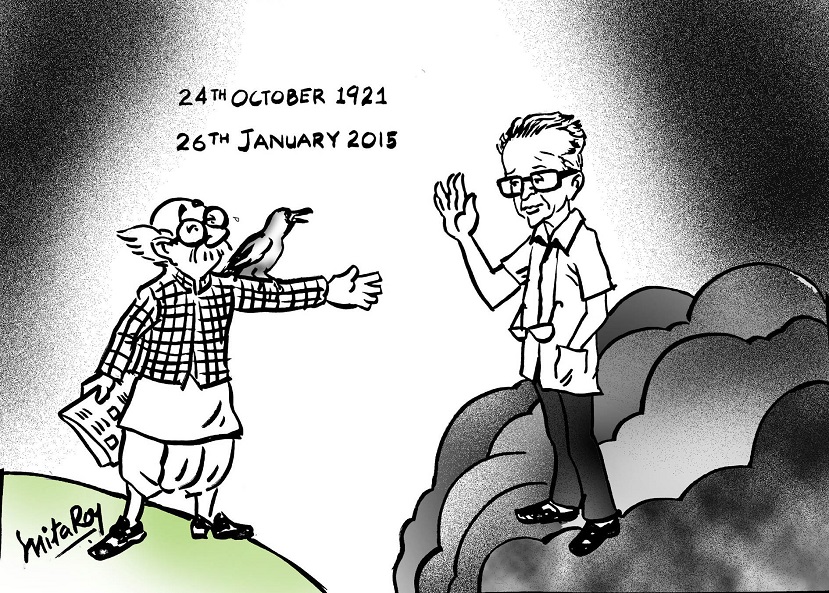 Laxman’s cartoons captured the entire gamut of contemporary Indian Diaspora. his sketches infuses life on the paper and still pictures come alive giving the impression of the event  taking place right in front of the eyes of the reader. This unique feature sets him apart from rest of the cartoonists. His sketches can be felt as if brimming with life and his characters vouch fully pulsates with life. His powerful yet simple lines evoked vibrant and bustling village life where village folk can be felt working, cows and goats grazing, women cooking, smoke coming out of stoves, crows pecking at rotten food, dogs rummaging for leftovers, and city life where poor people reside inside pipes and rear their families there. Minister on the dais or rushing to catch the flight. The strong visuals also evoke sounds, and one can hear the cacophony of the city life, like  noisy loudspeakers, minister giving speech, the indistinct noises of people talking, vehicles honking etc.

Just opposite to this is the dormant, quiescent, and an inert presence of Laxman’s common man whose conspicuous and inexplicable silence has turned him into an enigma. At times he is bemused or little surprised but mostly has an apathetic presence as a passerby or a bystander. He belongs to that genre who are aware and affected but who chose not to speak out.  It is unusual that he never uttered a word ever since he was conceptualized and came into being. This contrast always gives an intriguing twist to Laxman’s cartoons.

Does the common man really represent the millions of this country? Are we Indians not politically and socially very vocal? At any tea stall or railway station or bus stop we can be seen indulging in vociferous discussion over either on cricket or politics. Administration fails when the common man takes to the streets to protest against price rise or any issue affecting him but In the same country where agriculture is the pre-dominant sector of the economy, it is an irony that farmer’s are doomed to end their lives. Similarly corruption in most of the segments leaves us hapless. Doesn’t this helplessness and vulnerability get reflected in the muteness of Laxman’s common man? The common man is helpless in his own country. It is these mute millions that he represents.

His satirical punch lines have covered almost every aspect of social and political life in India but I have not come across any cartoon that reflects on women plight in our country like, honour killings, female foeticide, dowry, illiteracy, gender inequality He definitely must have drawn on these issues but there should have been more cartoons on such topics for his cartoons were mightier enough to dwell deep into people’s psyche. Last but not the least; one can never miss on the fact that Mr RK Laxman had the distinction of being the only journalist who, by means of his chosen medium, covered perhaps every major political event in India over the last 50 years.

Political Cartoonist Mita Roy has been associated with The Pioneer, Swatantra Bharat, Blitz, Amar Ujala, Dharamyug, Sunday Mail, Outlook Saptahik etc. Her career started in 1985 which has been mentioned in a book on Advanced Journalism by Mr. Adarsh Km Varma(Ex Professor IIMC). Her work was referenced and discussed positively in a book on the history of cartooning in India. In particular the book ‘Caricaturing culture in India’ noted her contribution as the first woman political cartoonist in the Indian press. She is a cartoonist, a caricaturist, an illustrator, a painter and an animal activist. contact: mitaroy10@gmail.com